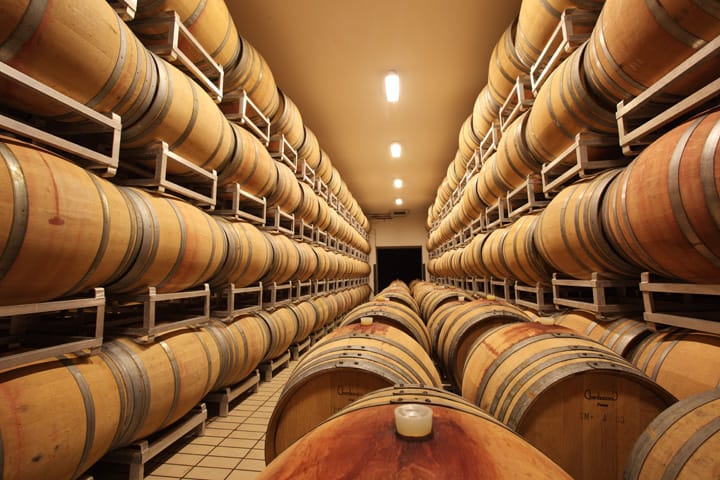 Cortona is perched on a spectacular hilltop at 600 m AMSL overlooking the Valdichiana, affording stunning views of Lake Trasimeno and Mount Amiata. Here the vine-growing and wine-making tradition can be traced back to the Etruscan period.

Pliny the Younger is said to have loved a white Cortona wine known as "Etesiaca" and Pope Paul III liked to have wines produced in the Cortona area delivered to his banquets.

Great poet Giosuè Carducci took inspiration for his work letting his gaze wander across the lush vineyard and olive grove strewn hills and valleys. Soils and a microclimate particularly suited for vine-growing have encouraged farmers to invest on this territory in the past and over the years the Cortona DOC has become an important player on the domestic and international stage.

Set in one of the most enchanting areas of Cortona, you may visit the Baracchi wineries run by the Baracchi family, owners of the delightful Relais & Châteaux and Spa “Il Falconiere”, luxury hotel and fancy restaurant regularly featured in all the best guides.

Here Riccardo, ably supported by son Benedetto and enologist Stefano Chioccioli, decided to keep up the long-standing family tradition in wine-making since the early 1900s by creating a fascinating boutique winery featuring unique and special products.

Located on the Farneta hill, in Poggiobello, the Cantina Stefano Amerighi is the new biodynamic, environment-friendly player on the Cortona wine-making scene. Extensive geological and climatic investigations carried out on the estate confirmed its suitability for the Syrah varietal. In this traditional winery grapes are still crushed by foot and vines are still grown traditionally with no added chemicals. So come and taste a great Syrah!

The Baldetti estate is located in Pietraia, at the very heart of the Cortona countryside. Vine-growing and wine-making have always played a significant role at the Baldetti estate starting from the 1960s when the current owner, Mario Baldetti, decided to modernize the existing vineyards. The Baldetti winery has been one of the first within the province of Arezzo to buy wine bottling machines during the 1970s. In 2010 the winery opted for a further modernization to produce high quality wines by using cutting-edge techniques, showing great passion and love for the territory. Thanks to an optimal microclimate due to the proximity of Lake Trasimeno and to sandstone soils, the wines produced by the Baldetti winery have great texture and unmistakable taste.

Farm Leuta represents a dream, great passion and love for the land and for the return to the roots. In 1999 the owners, Loris and Enzo, decided to quit their jobs in the world of finance to rediscover their roots and devote themselves to vine-growing. The Leuta winery is based in Centoia, close to Cortona, and has 6 vineyards spread over about 13 hectares of farmland. Leuta decided to become an organic winery to guarantee better biodiversity of soils and integrity in the wine-making process to produce high quality wines.

Located on the hill of Farneta, in the hamlet named La Rota, Cantina Canaio first appeared on the wine scene of Cortona when the owners, having over thirty years' experience in growing and selling grapes, decided to start making wine and to sell their production that is around 7,000 bottles per year.

The estate extends over about 5 hectares of vineyards and includes a beautiful country house of 350 sq.m. with two underground wine cellars that are linked through a 28-meter-long tunnel. After visiting the winery, tourists are invited to taste excellent Syrah and Merlot wines on their own or paired with traditional local food.

Cantina Canaio is a member of the Cortona Vini consortium, which actively promotes the excellent wines produced within the region of Cortona.

We are located in Val di Chio, a beautiful valley leading to Castiglion Fiorentino, a small city of Eruscan origins in the heart of Tuscany.

This family business, passed down through generations after generations, is now managed by Mr. Gabriele Mazzeschi. He has wisely combined his academic knowledge with his family's experience in order to achieve the best results in the production of wine, oil and cereals.

To ensure environmental sustainability, we use organic and biodynamic farming techniques, free of any parasiticidal treatment or chemical fertilisation.