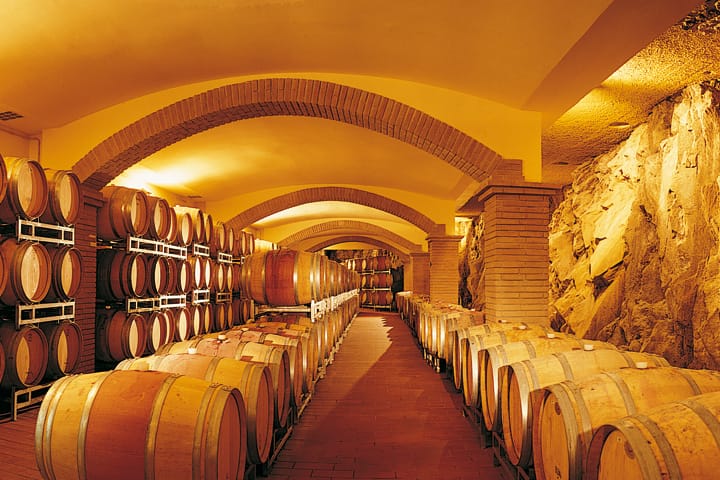 Produced in the historical wine-producing area between Siena and Florence, Chianti Classico is certainly the best known red Italian wine all over the world. Chianti was first produced at the Castello di Brolio estate after baron Bettino Ricasoli, a great enologist and passionate farmer, developed its recipe; having widely experimented at his Brolio vineyards, he eventually hit the right blend for the production of Chianti.

Sangiovese 75-90%, Canaiolo 5-10%, Malvasia and Trebbiano 2-5%. From then on, the fame of Chianti spread to the four corners of the world. In the 1970s the famous flask of Chianti was a table-top icon in the finest restaurants worldwide. Today Chianti Classico wine producers can be counted by the hundreds, ranging from high-tech farms to farms that have remained faithful to the traditional "governo alla toscana" technique.

Wine Tours Cortona will take you on a journey to discover the most charming wine estates in the Chianti region, where you will be able to taste unique wines including some extraordinary vintages.

The Poggiali family has been running a dynamic and modern winery since 1966 in accordance with the Italian tradition of wine-making. The Grand Dukes of Tuscany once lived in the Felsina estate, which was mainly devoted to olive growing in the past. Thanks to a favorable microclimate and perfect soils for vine growing, the owners of this estate have then decided to grow Sangiovese grapes and produce Chianti Classico wine. The Felsina vine varieties are thus the expression of this specific terroir, the scents, and landscape of this beautiful area in Tuscany between the Ombrone valley and the mounts of Chianti.

This state-of-the-art winery is owned by James B. Sherwood, president and major shareholder of the Orient Express Hotel Ltd, who radically renovated the old farmhouse to make it a jewel of technology and elegance.

This winery only produces great wines. The underground wine cellar (10 feet) guarantees optimum conditions and temperatures for wines to attain exceptional elegance and quality. Nothing is left to chance: fermentation in carried out only in steel; wine is only aged in 30 hl French oak barrels and 225 litre barriques replaced every two years.

A wine vault in the basement houses premium bottles held for some of the best known restaurants in the world.